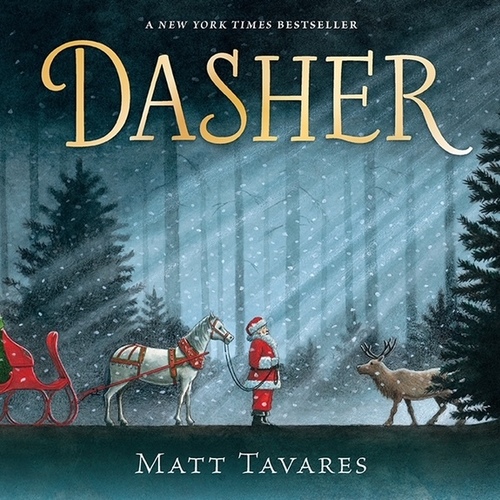 Virtual story-time with author-illustrator Matt Tavares and his beautiful holiday book, Dasher. Join us to get a special reading of the book by the author himself, find out the story behind Dasher, and enter our Dasher drawing contest to win exclusive prizes!

We will have copies of Dasher with autographed bookplates available at The Country Bookshop.

Matt Tavares is the author-illustrator of Crossing Niagara, Henry Aaron's Dream, There Goes Ted Williams, Becoming Babe Ruth, and Growing Up Pedro, as well as Zachary's Ball, Oliver's Game, and Mudball. He is the illustrator of 'Twas the Night Before Christmas, Over the River and Through the Wood, Lady Liberty by Doreen Rappaport, The Gingerbread Pirates by Kristin Kladstrup, and Jubilee! by Alica Potter. Most recently he wrote and illustrated the modern Christmas tale Red and Lulu. Matt Tavares lives in Ogunquit, Maine.A Note from Matt TavaresThe question that led to Dasher was: How did Santa's team of reindeer become Santa's team of reindeer? These animals are world famous, yet somehow I had never heard a story that explained how they were chosen for this important job. I wanted to tell that story.

So I did a little research. I found centuries-old images of St. Nicholas delivering presents with the assistance of a flying horse. I wondered what might have led him to change from a single horse to a team of eight reindeer.

At first, I was stumped. Then, one chilly day in January 2017, during a ten-minute drive home from my daughter's basketball game, the idea for Dasher appeared, almost fully formed (it doesn't usually happen this way!).

I pictured a family of reindeer crammed together under the hot sun, part of an early nineteenth-century traveling menagerie of exotic animals. I imagined Mama Reindeer telling her children about the North Pole, where she and Papa had once lived happily under the glow of the North Star. And I pictured Dasher, the youngest reindeer, gazing up at the North Star longing for crisp, cold air and cool blankets of white snow.

When I got home, I wrote it all down as fast as I could, and three days later, the first draft of Dasher was done.