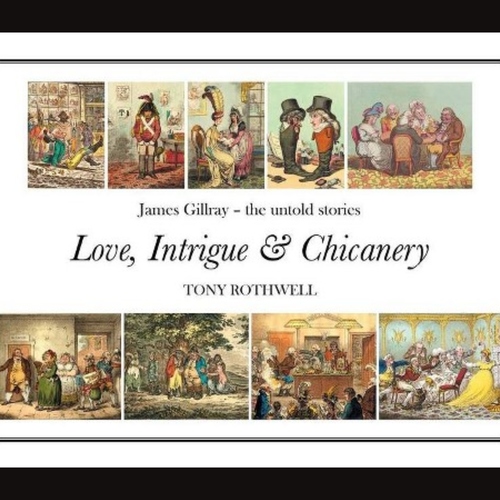 The Country Bookshop will host an event at the Weymouth Center, Southern Pines on October 13th where a selection of Gillray's original 18th century prints will be on display and, following a talk by Tony Rothwell, a reception and book-signing.

Love, Intrigue and Chicanery, by local author Tony Rothwell, is set in Georgian England and inspired by the prints of the famous satirist James Gillray. A hard-back book with copious full-color prints and a host of fascinating characters, from pickpockets and scoundrels to lords and landlords, writer and actress Joyce Rheeling sums it up -

"A picture may be worth a thousand words but how much more fun to have actual words to anchor us to the splendid Gillray caricatures in the book. I could hear every voice as a real character, and as an actor, I longed to read them aloud for the sheer joy of bringing them alive through Tony Rothwell's magical literary invention."

James Gillray was a British caricaturist and printmaker active from 1779 to 1811. He became famous in his own lifetime for his unmerciful satires on politicians, high society and the Royal family during the scandal-rich Regency period, earning him the contemporary description of 'a caterpillar on the green leaf of reputation'. Today, he is arguably the most influential caricaturist the world has known.

But while he is credited with being the father of the political cartoon, he also dabbled in the world outside the high and mighty, satirizing everyday social situations from ideas often provided by friends. As I delved into his work, I became familiar with those prints also, some of which had no known background descriptions in either contemporary books or the British Museum's archives. I thought it would be fun to remedy that situation which was the inspiration for the stories in this book.