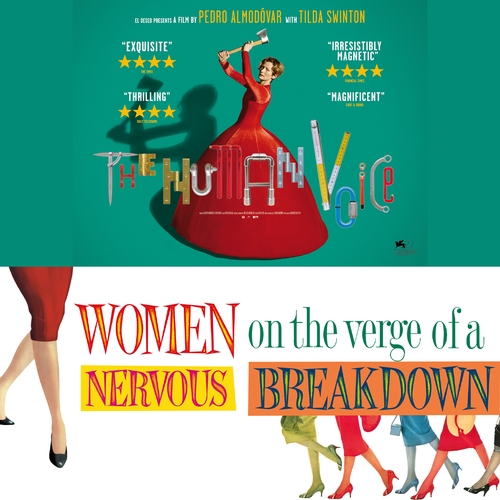 Join us for a special double feature screening of THE HUMAN VOICE, Pedro Almodóvar's newest short film, along with a retro screening of WOMEN ON THE VERGE OF A NERVOUS BREAKDOWN. Two extraordinary films for the price of one! (Total Run Time: 1 hr 58 min)

A woman watches time passing next to the suitcases of her ex-lover (who is supposed to come pick them up, but never arrives) and a restless dog who doesn’t understand that his master has abandoned him.

WOMEN ON THE VERGE OF A NERVOUS BREAKDOWN: Melding melodrama with screwball farce, this Academy Award–nominated black comedy was Pedro Almodóvar’s international breakthrough and secured his place at the vanguard of modern Spanish cinema. Continuing the auteur’s exploration of the female psyche, Women on the Verge of a Nervous Breakdown tells the story of Pepa—played by the director’s frequent collaborator Carmen Maura—who resolves to kill herself with a batch of sleeping-pill-laced gazpacho after her lover leaves her. Fortunately, she is interrupted by a deliciously chaotic series of events.