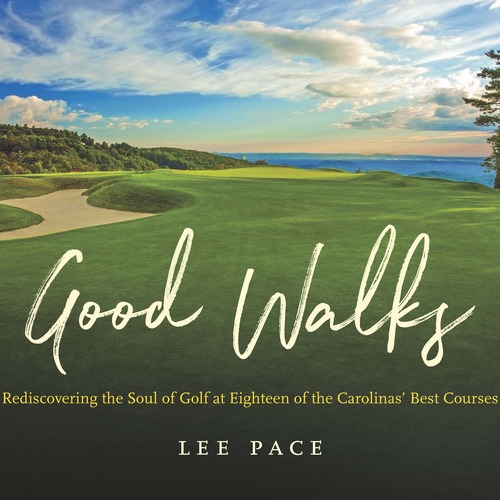 Lee Pace in conversation with Jim Moriarty at The Country Bookshop.

Autographed books will be available for purchase.

Good Walks celebrates the beauty, tradition, and variety of golf across the Carolinas, featuring eighteen beloved courses as experienced by the walking golfer. One of golf's earliest appeals was its health-giving benefits, with players walking some four miles over varied terrain, making stamina and endurance an important part of the sport. Most recreational players today choose motorized carts. But Lee Pace believes that the slower pace and on-the-ground view associated with walking gives one an opportunity to savor the experience, understand the nuances of course design and landscape architecture, and appreciate the small touches that make our region's best clubs and courses special. The Carolinas are a cradle for the game in the United States, making walking its courses an ideal way to connect past and present.

Attractively illustrated with full-color photography, each essay tells the story of a course and how it is experienced on foot. Guiding readers around fabled courses like Pinehurst No. 2 and new classics like Kiawah Island's Ocean Course, private clubs and municipal courses, resort destinations and urban gems, Pace reflects on legendary course architects, famous tournaments, notable players, ties between the game's founders and the Carolinas, and more. Whether you're a committed traditionalist or new to the game, this book will inspire you to slow down and enjoy the best of what golf has to offer.

Lee Pace is a Chapel Hill based author, editor, publisher and broadcaster who has spent the last thirty years writing about golf in the Carolinas and beyond.

He has written four books about the golf heritage of Pinehurst Resort & Country Club, most recently the 2012 volume The Golden Age of Pinehurst -- The Rebirth of No. 2, which chronicles the evolution of architect Donald Ross's tour de force and the restoration program of Bill Coore and Ben Crenshaw from 2010-11. He has also produced club histories for the sister clubs, Pine Needles and Mid Pines, as well as Forsyth Country Club and Secession Golf Club. He lives in Chapel Hill, North Carolina

Jim Moriarty grew up in Northern Indiana and attended Phillips Exeter Academy in Exeter, New Hampshire, graduating in 1969. He received a B.A. from Oberlin College, Oberlin, Ohio, in 1973 majoring in English and Creative Writing. His first job in journalism was as a sportswriter at the South Bend Tribune, South Bend, Indiana, where he worked for five years covering football, hockey, golf and writing sports columns. In 1979 he became the Associate Editor of Golf World Magazine where he remained until 1984 when he left to freelance both writing and photography, contributing to many publications including Golf Digest, Golf World, GOLF, Golf Journal and Sports Illustrated. He worked with Golf Digest and Golf World, both Conde Nast publications, for over 28 years winning numerous golf writing awards. In 2005, his first novel, Open Season, a murder mystery with a golf setting, was published by Ann Arbor Media Group. In 2016 his book Playing Through, a series of essays about golf, was released by the University of Nebraska Press. He is the Editor of Pinestraw magazine in Southern Pines, North Carolina, where he lives with his wife, Audrey.