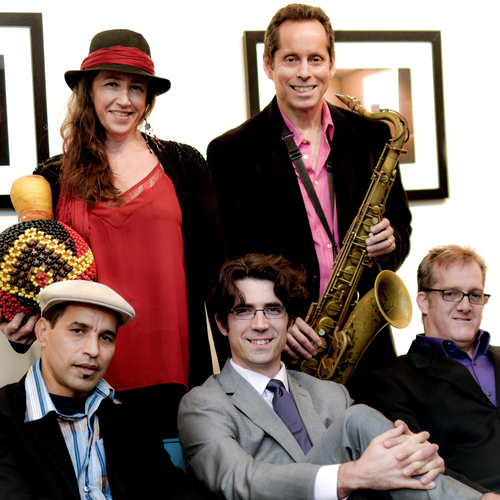 BPAC will be jumping with the sounds of Latin Jazz and LA FIESTA LATIN JAZZ QUINTET: FIESTA IN SOUND. Experience their delightful sound in the beautiful and intimate McPherson Theater!

The members of the quintet are:

GREGG GELB - leader, saxophonist, clarinetist and composer. Awarded the City of Raleigh Medal of the Arts in 2018.

RAMON ORTIZ - Latin Jazz percussionist who is a native of the Dominican Republic began playing professionally in Santo Domingo. In his 20’s he moved to Montreal, Quebec which enabled him to play throughout Canada, the U.S., and Europe.

STEVE ANDERSON - critically acclaimed composer and pianist whose music has been published on fourteen compact discs, four of which have appeared on the Grammy® Awards ballots.

BEVERLY BOTSFORD - cross-cultural percussionist and educator who has worked with Chuck Davis and the African American Dance Ensemble, Urban Bush Women, American Dance Festival faculty and 15 years of touring with Grammy nominated, jazz vocalist, Nnenna Freelon, in such venues as the Hollywood Bowl, the Umbria Jazz Festival, Lincoln Center as well as in London, Greece, Brazil and Angola.

ANDY KLEINDIENST - Bassist, educator, and trombonist. Since 2007 Andy has been the co-director for Orquesta GarDel and in 2011 the band released the Triangle’s first album of original timba music entitled Lo Que Tu Querias.

***Typically at BPAC events, the theatre doors open for seating no earlier than 30 minutes before the performance. There is no need to arrive extraordinarily early. Know that if you choose to arrive prior to lobby doors opening for a event, there is no place to sit and wait for the lobby to open other than the outdoor benches in Evelyn's Courtyard.