Kate Moore - The Woman They Could Not Silence

Kate Moore - The Woman They Could Not Silence 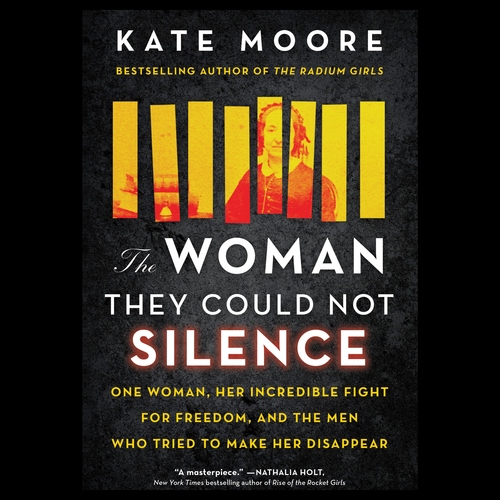 Kate Moore, bestselling author of The Radium Girls will be joining us on her paperback tour of The Woman They Could Not Silence.

This is a free event being held at The Pilot newspaper office.

From the New York Times, USA Today, and Wall Street Journal bestselling author of The Radium Girls comes another dark and dramatic but ultimately uplifting tale of a forgotten woman whose inspirational journey sparked lasting change for women's rights and exposed injustices that still resonate today.

1860: As the clash between the states rolls slowly to a boil, Elizabeth Packard, housewife and mother of six, is facing her own battle. The enemy sits across the table and sleeps in the next room. Her husband of twenty-one years is plotting against her because he feels increasingly threatened -- by Elizabeth's intellect, independence, and unwillingness to stifle her own thoughts. So Theophilus makes a plan to put his wife back in her place. One summer morning, he has her committed to an insane asylum.

The horrific conditions inside the Illinois State Hospital in Jacksonville, Illinois, are overseen by Dr. Andrew McFarland, a man who will prove to be even more dangerous to Elizabeth than her traitorous husband. But most disturbing is that Elizabeth is not the only sane woman confined to the institution. There are many rational women on her ward who tell the same story: they've been committed not because they need medical treatment but to keep them in line -- conveniently labeled crazy so their voices are ignored.

No one is willing to fight for their freedom and, disenfranchised both by gender and the stigma of their supposed madness, they cannot possibly fight for themselves. But Elizabeth is about to discover that the merit of losing everything is that you then have nothing to lose...

Kate Moore is the award-winning, New York Times and USA Today bestselling author of The Radium Girls. A British writer based in London, she has published numerous Sunday Times bestsellers, writing across various genres including history, biography, true crime, gift and humor. She began her career in publishing after graduating from the University of Warwick and worked as an in-house editor at various publishing houses for over a decade, most recently as an editorial director of Penguin Random House, and now works full-time as an author, ghostwriter and book editor. She has written more than 15 books and her work has been translated into more than 12 languages.