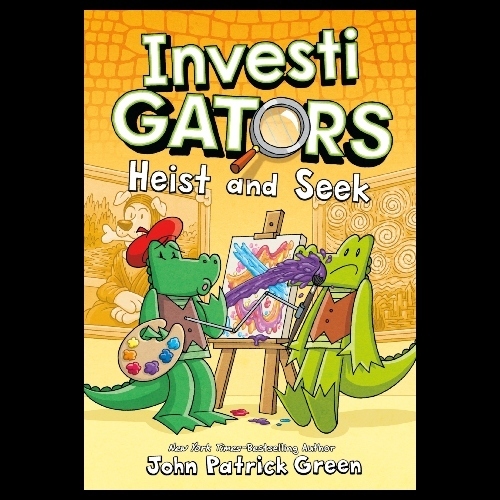 John Patrick Green author of the Investigators series will be at the bookshop to sign copies of his new book : Heist and Seek on Tuesday, September 27th at 4pm.

Also Characters Mango and Brash, the stars of the Investigators series will make their worldwide debut and will be available for photo ops before and after the event!

This event is free and appropriate for children ages 6-12 and their families.

When rare paintings go missing, the Investigators are called on the scene . . . the art scene! Mango and Brash go undercover and under canvas as internationally renowned painters to expose a crook who has truly mastered the art of crime! Can they recover the missing masterpieces and save the city art museum’s fundraising gala before it's too late . . . and they run out of appetizers? Find out in this latest pièce de résistance of action-packed illustrated fun.John Patrick Green is a human with the human job of making books about animals with human jobs, such as Hippopotamister, the Kitten Construction Company series, and now the InvestiGators series, all from First Second Books. John is definitely not just a bunch of animals wearing a human suit pretending to have a human job. He is also the artist and co-creator of the graphic novel series Teen Boat!, with writer Dave Roman. John lives in Brooklyn in an apartment that doesn’t allow animals other than the ones living in his head.