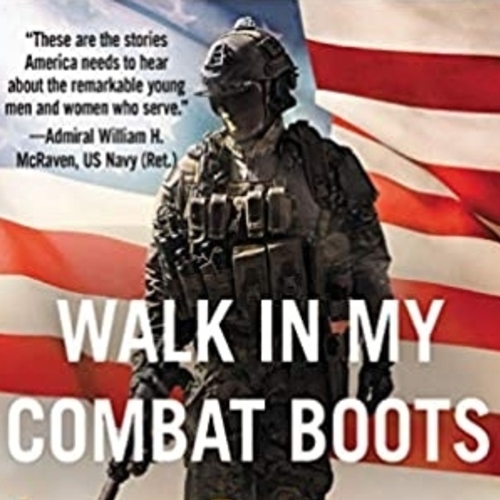 Each ticket includes a hardcover copy of Walk in my Combat Boots and access to the Zoom event.

Ticket choices include book pickup or book shipping. Books will be available for pickup or shipping February 2nd.

You will receive your login for the Zoom event within 24 hours of the start time.

"These are the stories America needs to hear about the remarkable young men and women who serve." - Admiral William H. McRaven, US Navy (Ret.). The most moving and powerful war stories ever told, by the men and women who lived them.Walk in my Combat Boots is a powerful collection crafted from hundreds of original interviews by James Patterson, the world's #1 bestselling writer, and First Sergeant US Army (Ret.) Matt Eversmann, part of the Ranger unit portrayed in the movie Black Hawk Down.These are the brutally honest stories usually only shared amongst comrades in arms. Here, in the voices of the men and women who've fought overseas from Vietnam to Iraq and Afghanistan, is a rare eye-opening look into what wearing the uniform, fighting in combat, losing friends and coming home is really like. Readers who next thank a military member for their service will finally have a true understanding of what that thanks is for .James Patterson is the world's bestselling author. The creator of Alex Cross, he has produced more enduring fictional heroes than any other novelist alive. He lives in Florida with his family. Matt Eversmann retired from the Army after twenty years of service. His last assignment was as an Infantry Company First Sergeant in the 10th Mountain Division during the surge in Iraq. He spent almost half of his career in the 75th Ranger Regiment and was a member of Task Force Ranger, the unit immortalized in the film Black Hawk Down. Matt and his family live in West Palm Beach where he runs his own consulting company, Eversmann Advisory. Dan Schilling is a thirty-year special operations and Combat Control veteran and has had numerous combat and clandestine deployments around the world, including the operation popularly known as Black Hawk Down, where he is credited with saving the lives of a Ranger and SEAL under fire. He later founded and then served as the first commander of two special operations squadrons.