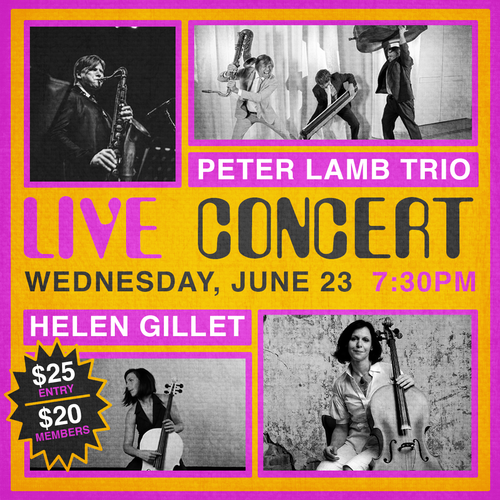 Helen Gillet is a singer-songwriter and surrealist-archeologist exploring synthesized sounds, texture, and rhythm using an acoustic cello.  For someone with her varied background, New Orleans, with its mix of cultures and musics, seemed like a natural place to call home. She was born in Belgium, raised in Singapore from the ages of 2 to 11, and routinely shuttled between the homelands of her Belgian father and American mother.  Over the years — working in New Orleans with musicians of all stripes, from avant-garde jazz and classical to pop and funk — Gillet has developed a singular polyglot style. The core of her work is solo performance with live looping, layering cello parts and vocal lines. Rhythmic figures emerge with bowed or plucked ostinatos or a variety of rubbing and slapping on the body of the cello, then enhanced with melodies played or sung in her haunting alto. Her mixed musical vocabulary is commensurate with her disparate travels — French chanson of the 1940s, Belgian folk tunes sung in Walloon, a mix of rock and punk from the likes of PJ Harvey and X-Ray Spex, and her own affecting originals, like audience favorite “Julien,” sung in a mix of French and English. Gillet’s solo performance is known for its enigmatic quality as she fabricates each song with innovative use of the cello and true mastery of live looping technology.

Peter Lamb has been likened to a ‘giant possessed Muppet, weaving and bobbing all over the stage’ and if you have ever seen him play, you are probably nodding your head as you read this. This Raleigh based saxophonist blends a mixture of Mingus style jazz with New Orleans style jazz for a sound that makes you too want to weave and bob. Peter’s love for music doesn’t start and end with him playing saxophone. He also can be caught composing and arranging music that comes at you from every direction resonating with young and old alike. In addition to putting out his own CD self-titled Peter Lamb and The Wolves, Peter has also recorded with local artists The Countdown Quartet, The Fleshtones, Heads on Sticks, Chris Stamey, The Rosebuds and The Savage Knights, as well as, Ben Folds Five, Clay Aiken and Josh Grobin.