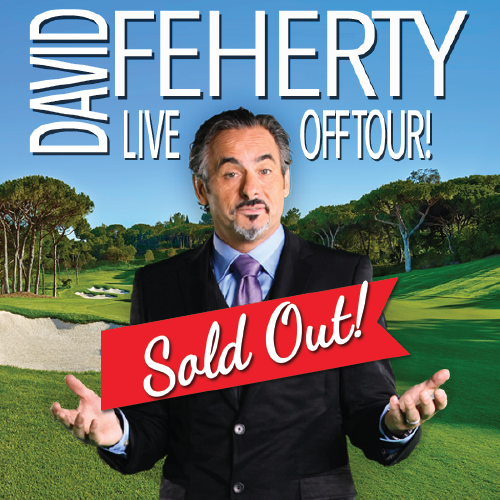 DUE TO AN UNFORESEEN ENGAGEMENT WITH NBC GOLF, MR. FEHERTY HAS TO POSTPONE HIS EVENT AT BPAC UNTIL JUNE 25, 2020. PREVIOUSLY PURCHASED TICKETS WILL BE HONORED, NO ACTION IS REQUIRED. HOWEVER, IF YOU ARE UNABLE TO ATTEND THE JUNE 25TH SHOW, PLEASE CONTACT OUR BOX OFFICE TO RECEIVE A FULL REFUND. DAVID'S TEAM AND BPAC APOLOGIZE FOR ANY INCONVENIENCE THIS MAY CAUSE.

David Feherty–Live Off Tour! – David Feherty is a former professional golfer on the European Tour and PGA Tour. He now works as a writer and broadcaster with NBC Sports and Golf Channel. David was born in Bangor, County Down, Northern Ireland. He turned professional in 1976 and spent most of his playing career in Europe, where he won five times and finished in the top ten twice in the European Tour’s Order of Merit, placing tenth in 1989 and eighth in 1990. He spent 1994 and 1995 playing mainly on the PGA Tour in the U.S., and the best result on the tour was a second place finish at the 1994 New England Classic. David represented Ireland in international competition and captained the victorious 1990 Alfred Dunhill Cup team and played for Europe on the 1991 Ryder Cup team.

In 1997, David retired from the tours and became an on-course reporter and golf analyst. The first episode of Feherty debuted in 2011 as the most-watched premiere for an original series in Golf Channel history. Over the span of five seasons, David has welcomed a variety of guests on his Golf Channel show, including golf-loving personalities like former President Bill Clinton, former New York City Mayor Rudy Giuliani, five-time NBA MVP Bill Russell, comedic genius Larry David,actors Samuel L. Jackson and Don Cheadle. In 2014, David was nominated for a 2014 Emmy Award–“Outstanding Sports Personality, Studio Host.” Feherty also appears in advertisements for Bridgestone Golf and Hyundai. David has been dubbed “one of the funniest men in the game” by Yahoo! Sports. Similarly, the Feherty series has received rave reviews, having been described as “a cross between Oprah Winfrey and Johnny Carson” by The New York Times.

In 2014, David decided to take his act on the road and travel across North America for his new live show Feherty–Live Off Tour. His cutting edge style is full of great stories from behind the scenes, a show you don’t want to miss. He will be bringing his sharp wit and colorful personality to a city near you!

“David Feherty’s one man show: uncensored, unhinged, and worth the price of admission. It really was stupendous!” – Golf Digest

“David Feherty was uproariously funny. It was two hours of zaniness and madcap story-telling. People were coming out of their seats with laughter!” – Pittsburgh Post-Gazette

·        Guaranteed Seat within the first 10 rows in the Auditorium