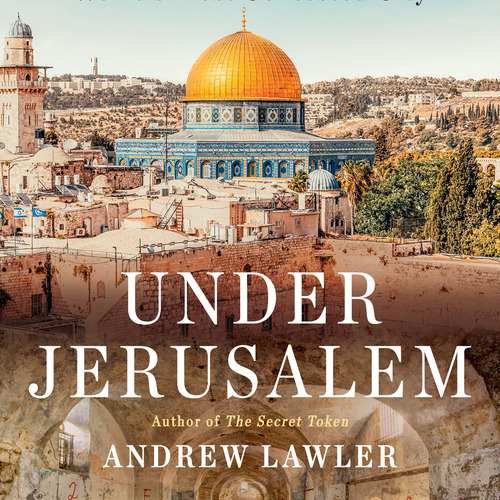 In UNDER JERUSALEM: The Buried History of the World’s Most Contested City, acclaimed journalist Andrew Lawler takes us into the tombs, tunnels, and trenches of the Holy City—a saga of biblical treasures, intrepid explorers, and political upheaval—and brings to life the indelible characters who have investigated this subterranean landscape. He will be joining Kimberly Taws from The Country Bookshop to chat about this book.

Check out Lawler's article in National Geographic about the same topic!

As he did in his absorbing, page-turning investigation into the Lost Colony of Roanoke in the national bestseller The Secret Token and in the November 2019 National Geographic cover story that inspired UNDER JERUSALEM, Lawler writes with clarity and verve, revealing how a 150-year quest to unearth the city’s Biblical history has not only led to remarkable discoveries, but also contributed to riots, bloodshed, and the impossibility of peace in the Middle East. And yet while the colorful array of excavators have helped spawn Zionism, create the state of Israel, and ultimately defined the conflict over modern Jerusalem, their pursuits and struggles to control this contested place may also provide a map for two peoples and three faiths to peacefully coexist.

Sacred to three faiths and revered by more than half the people on the planet, Jerusalem conjures up powerful images of the celestial. Yet beneath its narrow alleys and holy places, the ancient city conceals a labyrinthine, three-dimensional time capsule recording five millennia of bustling prosperity, brutal war, and repeated religious innovation that altered the course of human history.

Since the days when Abraham Lincoln was in the White House, adventurers, archaeologists, and religious zealots have flocked here to hunt for buried treasure, unearth sacred artifacts like the Ark of the Covenant, and find proof of the Bible’s veracity. That digging to reveal the past continues today—and, in so doing, continues to alter the city’s future.

“Under Jerusalem is a brilliant, highly innovative history of the most contested city on the planet. Andrew Lawler uses these untold stories of archeological digs near and under Jerusalem’s sacred sites to convey all the colorful and violent and contentious history of the Israeli-Palestinian conflict. It is an astounding achievement—and a compulsive read.”—Kai Bird, Pulitzer Prize-winning historian and author of The Outlier and The Good Spy

“What lies beneath? Lawler knows. Evoking the sights, sounds, and smells of ancient and modern Jerusalem, he introduces the reader to a myriad of archaeologists and other colorful characters, all concerned with unearthing the ancient remains of the city, frequently while grappling with thorny modern political, ideological, and theological issues. A must read for anyone interested in either the history or archaeology of Jerusalem.”

“Every review of Andrew Lawler's book about the wild archaeological history of Jerusalem will mention Indiana Jones. This is not because the characters he describes are much like Jones—they're much more obsessed, more bonkers, or more mendacious—but because the Indiana Jones stories are among the few examples we have of stories about archaeology that are pure fun. Well, now there is another one, just as swashbuckling as the Spielberg movies, but with the added advantage of being all true.”—Charles C. Mann, New York Times bestselling author of 1491 and The Wizard and the Prophet