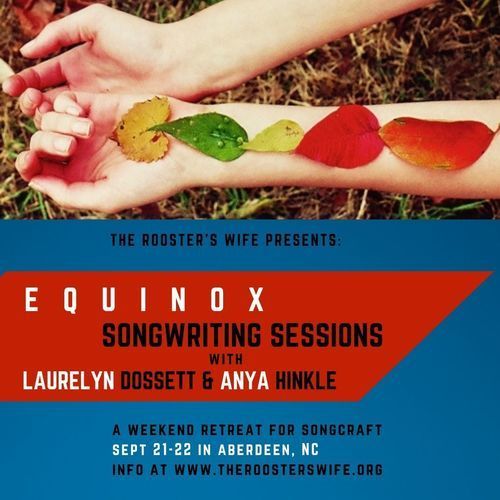 6:46-performance at The Rooster’s Wife (just down the street from the workshop) by Laurelyn and Anya

Singer/songwriter Laurelyn Dossett lives and writes in Stokes County, NC. Her songs have been appeared in film and television and have been recorded by Grammy-winning artists Levon Helm and Rhiannon Giddens. She is co-founder of the band Polecat Creek and has taught songwriting at Augusta Heritage Center.

Laurelyn has partnered with Triad Stage's Preston Lane on six plays-with-music, and in 2018 she premiered “Leaving Eden” at Playmaker’s with playwright Mike Wiley. Her song cycle, The Gathering: A Winter's Tale in Six Songs will be performed in November 2019 by the Winston-Salem Symphony.

Originally from the mountains of southwest Virginia, Anya Hinkle has developed as a notable songwriter with her Asheville NC-based "Appalachiacana" band Tellico. Steeped in the tones of bluegrass and folk, Hinkle has toured regionally and nationally for over a decade with international tours as far afield as Japan and France.

Her song “Courage for the Morning” off Tellico’s freshly released album Woven Waters (Organic Records) was #1 on the Folk DJ charts in November 2018, and her song “Ballad of Zona Abston” was a finalist in the Hazel Dickens Song Contest and winner of the Merlefest Chris Austin Songwriting Competition in 2019. Her song “Ever What They Say” was included in the prestigious Songwriter Showcase at the 2016 conference of the International Bluegrass Music Association.